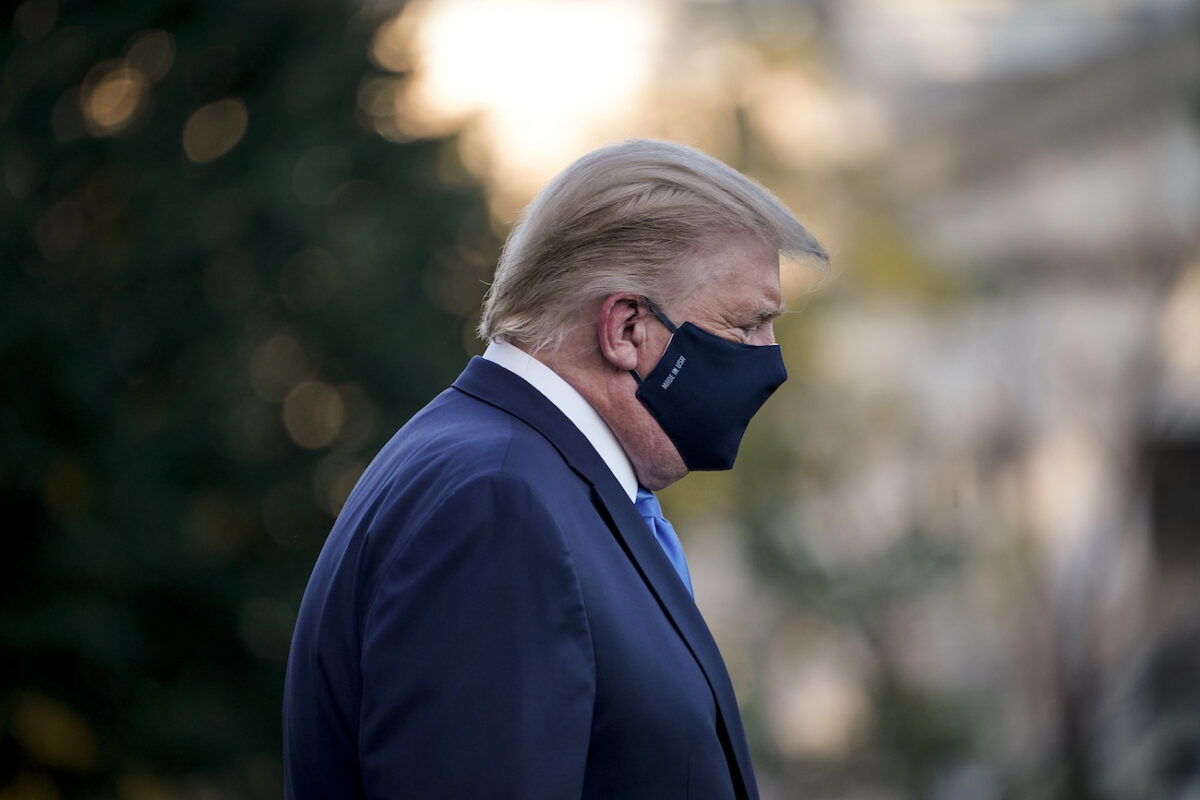 “This afternoon, in consultation with specialists from Walter Reed and John Hopkins University, I recommended movement of the President up to Walter Reed National Military Medical Center for further monitoring,” Conley said in the memorandum.

“This evening I am happy to report that the president is doing very well,” he continued. “He is not requiring any supplemental oxygen, but in consultation with specialists we have elected to initiate Remdesivir therapy.

“He has completed his first dose and is resting comfortably.”

Trump announced on Twitter Friday evening, “Going welI, I think! Thank you to all. LOVE!!!”

Trump’s Twitter feed has been unusually quiet since announcing his COVID-19 diagnosis in the early hours of Friday.

The president made his first public appearance since his positive test for the CCP (Chinese Communist Party) virus around 6:20 p.m. on Friday, as he walked out of the White House to take a flight to Walter Reed National Military Medical Center.

Trump will be working at the presidential offices at Walter Reed, which has a special suite available for the president with multiple rooms for rest, treatment, work, and dining,

White House press secretary Kayleigh McEnany announced prior to Trump’s move, “President Trump remains in good spirits, has mild symptoms, and has been working throughout the day. Out of an abundance of caution, and at the recommendation of his physician and medical experts, the president will be working from the presidential offices at Walter Reed for the next few days.”

On Friday afternoon, Conley released a health update (pdf) saying that the president remains fatigued but in good spirits.”

The update also said that as a precautionary measures, the president completed an infusion of RegEneron’s polyclonal antibody cocktail of 8 grams.

“In addition to the polyclonal antibodies, the president has been taking zinc, vitamin D, famotidine, melatonin and a daily aspirin,” Conley said in the update.

Trump released a video shortly after he arrived at Walter Reed thanking the public for the support. He said, “I think I’m doing very well but we’re going to make sure that things work out. The first lady is doing very well.”