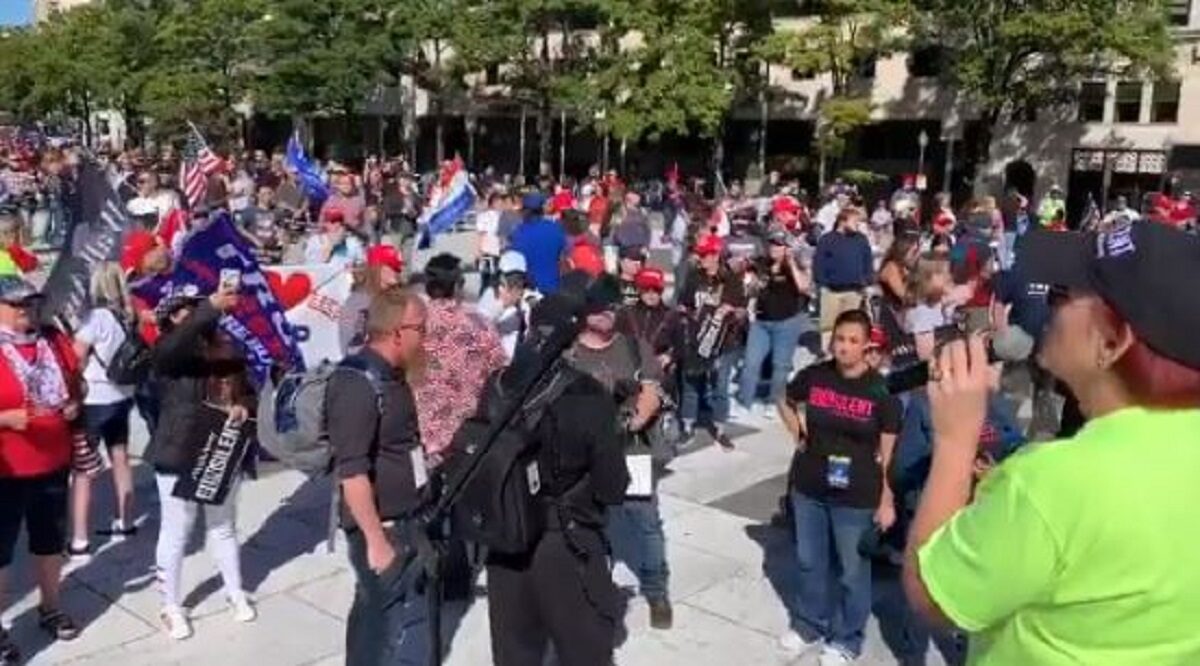 Thousands of people traveled to Washington on Saturday for a pro-President Donald Trump rally, according to initial estimates.

Video footage and photographs showed the crowd marching from Freedom Plaza to Sylvan Theater in an event organized by Brandon Straka, a former liberal who now supports Trump.

The tagline for the event was, “It’s time for the silent majority to become the unsilent.”

The silent majority is a term used to describe a group that holds their views in private but has ample numbers to influence events, such as the 2016 election.

Straka told the crowd near the Washington Monument, “This is so important, this is so historic, and so important that we’re doing this right now.”

The political activist said he’s found conservatives to be too passive and encouraged people to become more active in politics.

Straka said he grew afraid at times after holding some of his events, including one in Baltimore, Maryland, where only 100 people showed up. “It’s that fear that grips and controls conservatives that has allowed the radical left to become the radical left,” he said.

The rally took about 15 miles from Walter Reed National Military Medical Center, where Trump is being treated for COVID-19.

At the #WalkAway Unsilent Majority March on Washington there are about 8,000 registered attendees for the main rally. They have ex-military including #NavySEALs and Army Rangers in plain clothes doing recon to prevent any disruptions by counter-protests. pic.twitter.com/S6RqROaylN

Former military members, including ex-Navy SEALs and Army Rangers in plainclothes, were doing reconnaissance to prevent any disruptions, he added.

“I’m walking away from Black Lives Matter movement because they’re anti, they’re anti my president,” Femi Ogun, a black attendee, told Hogan. “They want him incarcerated, they want him dead, which, that’s not going to happen.”

The movement “sends destruction; it sends chaos; it sends confusion, and we don’t need that right now in society, you know, we need love,” he added later.

Black Lives Matter demonstrators arrived with megaphones to try to disrupt the event and several were arrested by U.S. Park Police after they assaulted officers, Hogan reported. A National Parks Services spokesperson didn’t immediately respond to a request for information on the arrests.

Other attendees also spoke out about why they traveled to Washington for the march.

Nico, a Virginia resident, told Daily Caller reporter Jorge Ventura that he attended the march because “we should not be ashamed of supporting our own president.”

Alexis, a Trump supporter from California, said she traveled to Washington to support Trump.

“I wanted to be able to show my face and show that there are black conservatives who support Trump,” she told Ventura.

Rep. Dan Crenshaw (R-Texas) told the rally that the true definition of justice is protecting the rights of individuals but that definition is being twisted by “the woke progressive.”

Other scheduled speakers included Scott Presler, a political activist, David Harris Jr., a political commentator, and Democrat Georgia Rep. Vernon Jones, who has come out in support of Trump.

The event took place about one week after thousands of people attended a prayer march in Washington. Vice President Mike Pence addressed that crowd.