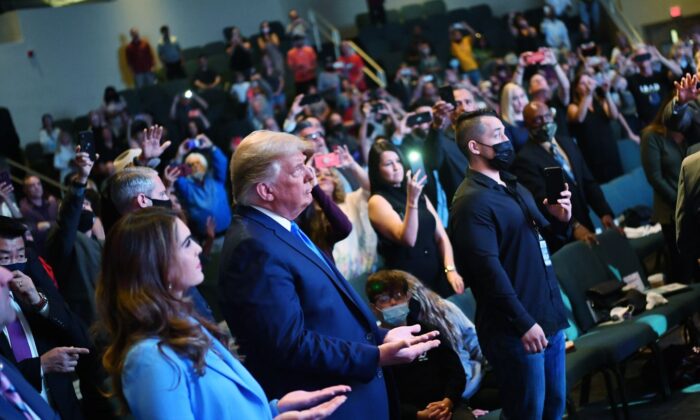 Pastor Paul Marc Goulet of the International Church of Las Vegas praised the president “because you just came to church,” the Las Vegas Review reported. About 200 congregants attended the service.

Trump was seen placing a number of $20 bills into the collection bucket when it went around.

“This is your third time here. That means you’re a church member,” he told Trump during the service. “I don’t care what anybody says. I love my president.”

Trump stopped at the church in October 2016. After the mass shooting in Las Vegas on Oct. 1, 2017, Trump also went to the church.

The president spoke to the crowd before the service ended.

“I go to many churches and I love going to churches,” he said. “I will be back many times.” He called on people to go out and vote in the November election.

“I know you’ve had a rough time in terms of the city —has been a tough place—but the job you’ve done to get people back is really, very special” he said of the church leaders. “These are two very special people. Your families are very, very special and you have great talent up there. Thank you all very much. It’s great talent. I know talent, and you’re great talent.”