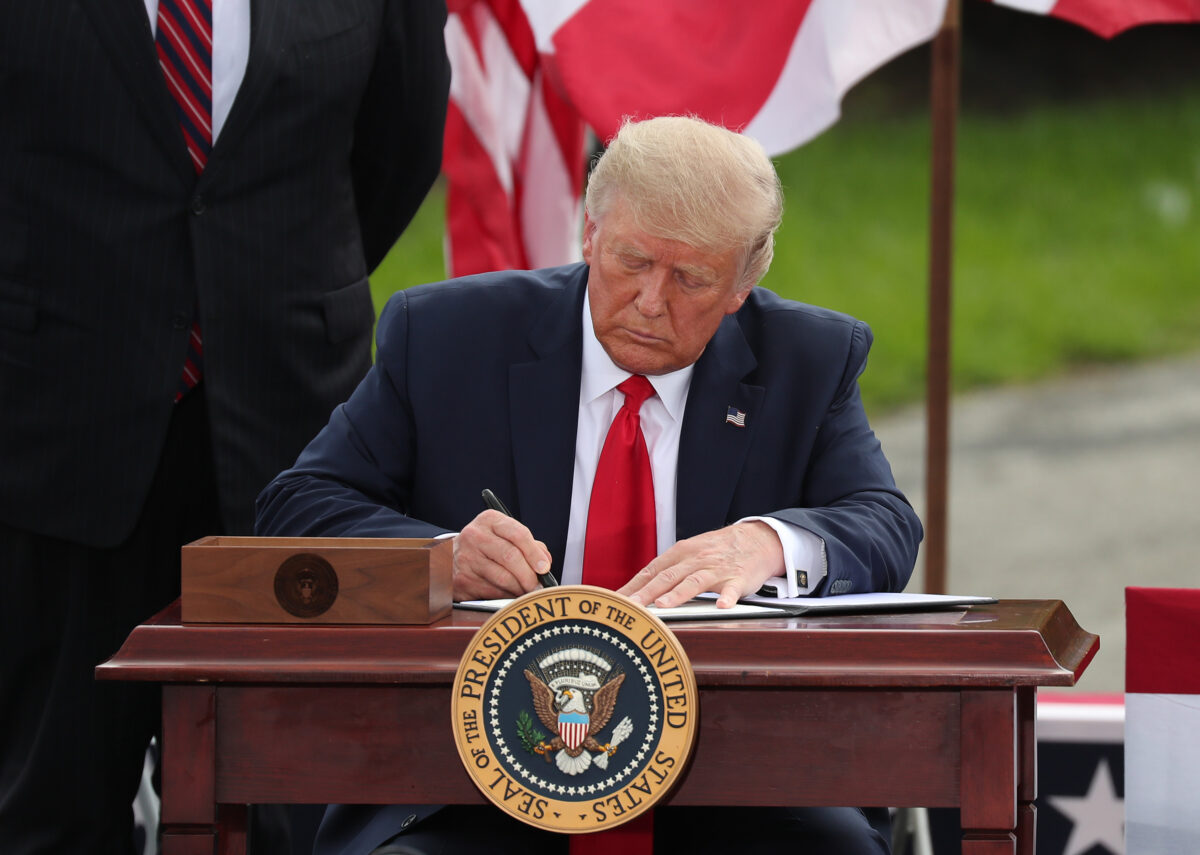 President Donald Trump on Wednesday signed an executive order that seeks to ramp up domestic production of critical minerals such as rare earth elements and support mining jobs in the United States, in a bid to reduce the nation’s reliance on Beijing.

China is currently the top global producer of the specialized minerals that are used to build electronics, military weapons, and other high-tech equipment. Last year, 80 percent of rare earths imported by the United States came directly from China.

The president’s executive order declares a national emergency in the U.S. mining industry, and asks the Department of the Interior to look into implementing the Defense Production Act (DPA) to fund mineral processing “that protects our national security.”

In a release, the White House said the order will slash unnecessary delays in permitting actions, providing Americans with job opportunities, and improving economic and national security.

“We will put our miners back to work,” Trump said.

Federal agencies will also be authorized to probe and work to reduce reliance on other nations for imports of minerals.

“The President will continue to protect our domestic supply chains for critical minerals from predatory Chinese action,” a White House statement said.

Rare earths are an obscure group of 17 minerals and there is no known substitute for them.

Trump signed the rare earth mining executive order as he made his way to campaign stops in Minnesota. Last month, Trump told supporters during a campaign visit to the state that his administration would set up tax credits for U.S. companies that shift their manufacturing facilities from China back to the United States, as he seeks to reduce reliance on Beijing and rebuild American manufacturing.

He also said his administration would strip federal contracts from companies that outsourced work to China, vowing to create 10 million jobs in 10 months in part through his economic plan.

More recently, the president raised the prospect of “decoupling” the U.S. economy from Beijing during his second term to bring back manufacturing jobs from China and key supply chains back to the United States.

The Defense Department was ordered by the White House last year to ramp up domestic production of samarium cobalt rare earth permanent magnets over concerns Beijing could restrict exports of the goods. They are often found in precision-guided missiles, smart bombs, and military jets.

While the United States used to be the leading producer of the minerals, China currently commands a lion’s share of the market after it displaced competitors by strategically flooding the global market over the last few decades.

“Since gaining this advantage, China has exploited its position in the rare earth elements market by coercing industries that rely on these elements to locate their facilities, intellectual property, and technology in China,” Trump said in his order.

“For instance, multiple companies were forced to add factory capacity in China after it suspended exports of processed rare earth elements to Japan in 2010, threatening that country’s industrial and defense sectors and disrupting rare earth elements prices worldwide.”

Trump’s executive order also aims to “reduce the vulnerability of the United States to the disruption of critical mineral supply chains through cooperation and coordination with partners and allies, including the private sector.”

Separate mineral-related legislation has been introduced by two Republican senators in the past year or so, but they have not passed so far.