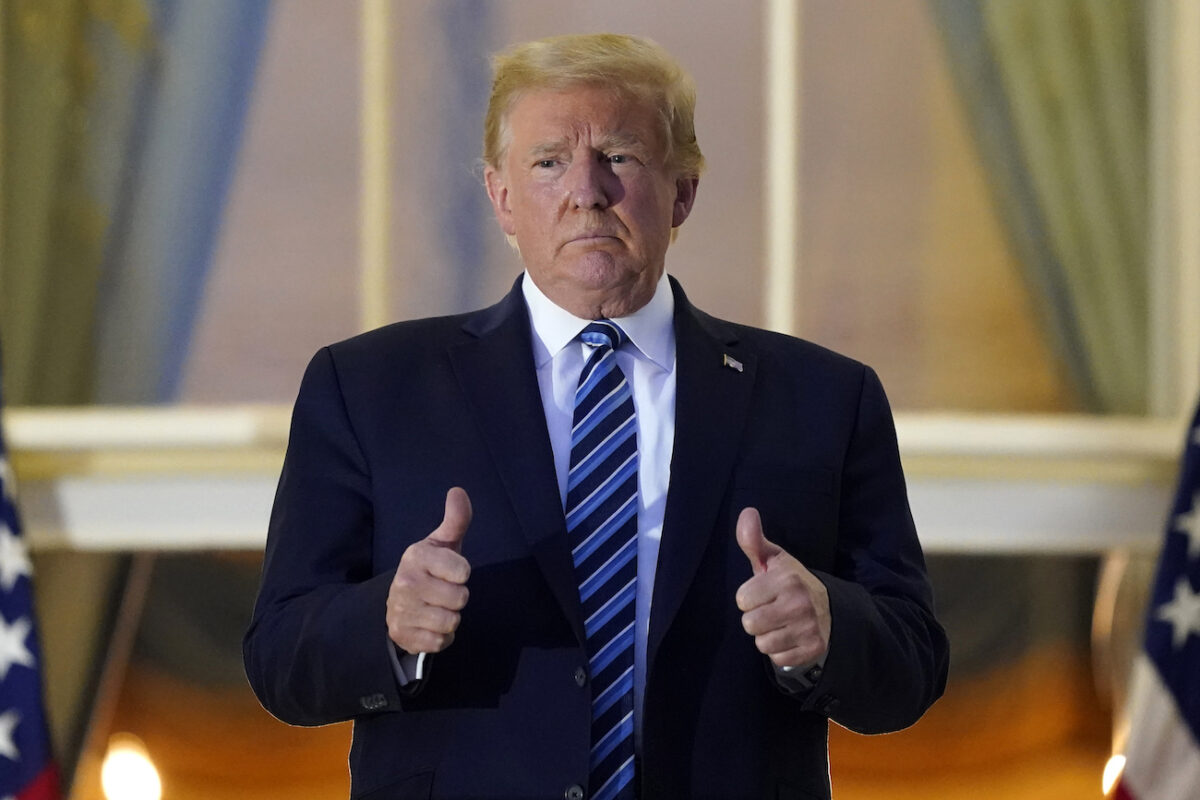 President Donald Trump returned to the White House after a four-day hospital stay with a message of optimism and grit for a nation fatigued by months of uncertainty and unprecedented shutdowns related to the spread of the Chinese Communist Party (CCP) virus, commonly known as the novel coronavirus.

“Don’t let it dominate you. Don’t be afraid of it,” the president said in a video message filmed Oct. 5 on the balcony of the White House, after his arrival from Walter Reed National Military Medical Center in Maryland.

Since testing positive for the CCP virus on Oct. 1, the president issued several video messages to the nation, all spoken from the perspective of someone dealing with the illness first hand. Upon his return home, he highlighted his own rapid improvement as a source of inspiration for people who fear becoming infected as the virus continues to spread.

The president delivered the remarks as some locales in the United States saw spikes in new cases, while others reimposed stifling lockdowns. In New York City, the former epicenter of the breakout in the United States, the Mayor appeared set to return nine neighborhoods to a lockdown on Oct. 7.

Trump, who has repeatedly suggested that Democratic-run states are exploiting the lockdowns to hurt his reelection chances by suffocating the economy, struck a defiant tone, suggesting the country needs to get back to work in the face of risks. The president also appeared to address his critics who have criticized his resistance to wearing a mask and decision to hold large-scale outdoor rallies.

“Don’t let it dominate, don’t let it take over your lives. Don’t let that happen, we have the greatest country in the world. We’re going back to work. We’re going to be out front,” the president said.

“As your leader, I had to do that. I knew there’s danger to it, but I had to do it. I stood out front, I led. Nobody that’s a leader would not do what I did. And I know there’s a risk, there’s a danger, but that’s OK. And now I’m better and maybe I’m immune.”

The president’s physician, Dr. Sean Conley, said in a statement on Oct. 6 that the president has “continued to do extremely well.”

“He had a restful first night at home, and today he reports no symptoms,” Conley said.

In an interview with The Epoch Times on Oct. 6, the president’s attorney, Rudy Giuliani, said he has been in touch with the president every day since Oct. 3.

Giuliani said the president is “fully engaged, totally involved in what’s going on,” adding that the only thing that’s restricted “are his physical movements out of the White House.”

When asked whether the experience changed Trump, Giuliani said he didn’t believe it changed Trump but “may have given him some insights he didn’t have before. … It certainly gave him great confidence that the new medicines that his Operation Warp Speed created are effective.”

Asked about comments by Trump earlier this year that China will pay a “very substantial price” for the virus outbreak, Giuliani said: “There’s no reason to telegraph to the Chinese what we are thinking about or what we’re going to do. All I can tell you is that he has been very tough on China.”

K.T. McFarland, President Donald Trump’s former deputy national security adviser, told The Epoch Times she believes that testing positive for the virus will enable Trump to speak to the American people from the perspective of having lived through the infection himself.

“It’s not something he has read in the book. He’s been to the school of coronavirus,” she said. “It’ll allow him to really speak with much more authority on what the country is going through.

“He’s been briefed on all of the experimental treatments and protocols as well as the upcoming vaccines,” McFarland added. “It will actually make him a far more powerful leader.”

The president continued to set the tone on Oct. 6, writing on Twitter that he is “FEELING GREAT!” and intends to participate in the debate against Democratic presidential nominee Joe Biden on Oct. 15. Later, he ordered White House negotiators to halt their efforts to make a deal with the Democrats on a stimulus package and wait until after the election. He also asked Senate Majority Leader Mitch McConnell (R-Ky.) to focus on confirming Supreme Court nominee Judge Amy Coney Barrett.

“The Stock Market is at record levels, JOBS and unemployment also coming back in record numbers,” the president wrote on Twitter. “We are leading the World in Economic Recovery, and THE BEST IS YET TO COME!”