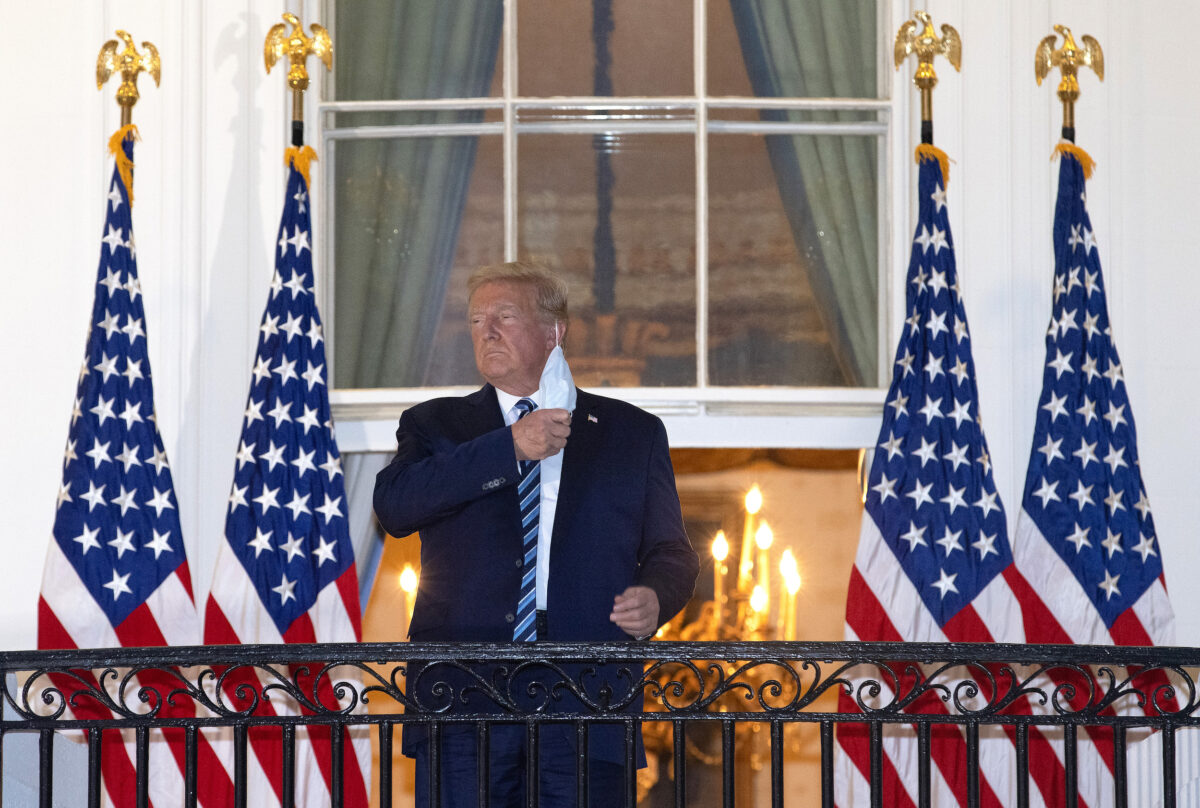 President Donald Trump suggested on Monday evening that he may now be immune to the Chinese Communist Party (CCP) virus, commonly known as the coronavirus.

“Now I’m better and maybe I’m immune,” Trump said in a video filmed at the White House and posted on Twitter.

Trump made the remarks shortly after returning to the White House from the Walter Reed Army Medical Center, where he spent four days after being diagnosed with the virus on Friday.

A number of studies suggest that the human body can develop a lasting immunity to the CCP virus, even in people who experience only mild symptoms, according to The New York Times.

Debate regarding the health of the two presidential candidates, both in their 70s, is one of a handful election issues receiving heightened attention due to the pandemic. Former Vice President Joe Biden, the Democratic presidential nominee, has been conducting a cautious, socially distanced campaign in a bid to avoid becoming infected with the virus. Trump, who returned to regular campaigning and large rallies before testing positive, may claim that immunity makes him a safer choice on Election Day.

In the video message posted on Twitter, the president encouraged Americans not to let their lives be dominated by the virus.

The president announced early on Oct. 2 that he and First Lady Melania Trump had tested positive for the CCP virus. He moved to Walter Reed later that day “out of an abundance of caution,” the White House announced at the time.

Trump said that he “didn’t feel so good” when he first set off to Walter Reed, but that he “could have left” the military hospital two days ago because he “felt great … better than 20 years ago” after receiving treatment.

The president’s physician, Sean Conley, told reporters outside the hospital on Monday afternoon that Trump has continued to improve and has “met or exceeded all standard hospital discharge criteria.” The medical team expressed cautious optimism and will continue to monitor the president’s vitals at the White House.

By the afternoon on Oct. 5, Trump had been fever-free for 72 hours and had normal blood oxygen levels and breathing. The doctors administered another dose of remdesivir before the president left for the White House. Trump is scheduled to receive his fifth and final dose of the intravenous anti-viral drug at the White House in the evening on Oct. 6.

“Though he may not be entirely out of the woods yet, the team and I agree that all of our evaluations, and most importantly his clinical status, support the president’s safe return home where he’ll be surrounded by world-class medical care 24/7,” Conley said.

In addition to First Lady Melania Trump, at least 11 other people within Trump’s orbit have tested positive for the CCP virus in recent days, including several who attended events with the president in the days leading up to his diagnosis.

The president had no complaints about his breathing and continued to work full time on Oct. 5, according to Dr. Sean Dooley, a pulmonologist at Walter Reed.

The president is still taking dexamethasone, according to Dr. Brian Thomas Garibaldi, the director of the Biocontainment Unit at Johns Hopkins. Dexamethasone is a steroid that is recommended for patients who require supplemental oxygen but aren’t on a ventilator. Conley explained that the team decided to proactively administer the drug early to address two dips in the president’s blood oxygen level, instead of taking the wait-and-see route. Trump received supplemental oxygen both times and recovered immediately, Conley said.

The president wasn’t short of breath and didn’t need the oxygen, the doctor added. He declined to discuss the results of the president’s lung scans.

Two of the doctors on the team have been working with local laboratories to inform the White House about the president’s ability to pass the virus on to others. The doctors at Walter Reed have also been strategizing how to ensure the president’s safe return home.

“We’ve worked with our infectious disease experts to make some recommendations for how to keep everything safe down at the White House for the president and those around him,” Conley said. “We’re looking for where he is going to be able to carry out his duties.”

The president briefly left the hospital in an armored vehicle on Oct. 4 to wave to a crowd of supporters gathered outside. He wore a mask and appeared, like he did on other videos released from the hospital, energetic and in good spirits. Conley told reporters that the president had already met the requirements for discharge at the time.

Conley noted that the medical team remained cautious in part because they were in uncharted territory, with Trump having received the therapies very early on after testing positive for the virus.

“We’re looking at this weekend, if we can get through to Monday [Oct. 12], with him remaining the same or improving better yet, then we will all take that final deep sigh of relief,” he said.