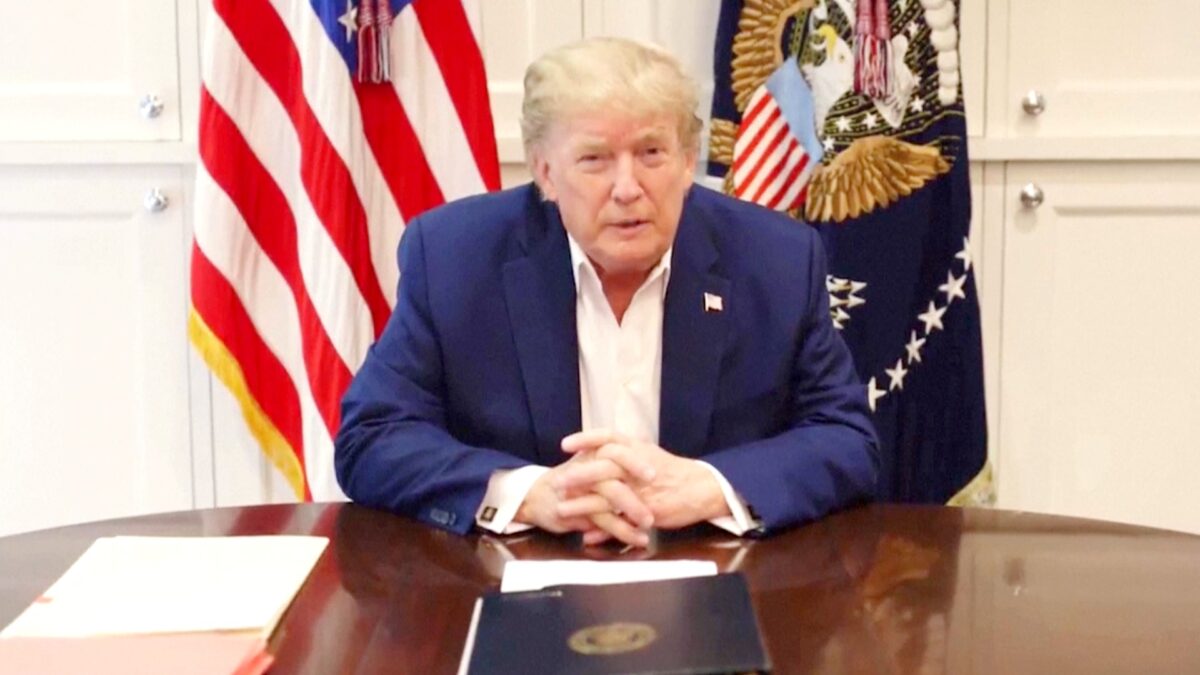 White House physician Dr. Sean P. Conley on Sunday said President Donald Trump’s condition, after testing positive for COVID-19 last week, “has continued to improve” and could return to the White House “as early as tomorrow.”

He noted that Trump’s condition is being closely monitored, adding that doctors noted two “transient drops in his oxygen” levels. He said that on Friday, Trump had a high fever and saw a drop in his oxygen levels before seeing an improvement. For his oxygen levels, dexamethasone was administered.

Conley’s team said that his “vital signs are stable” and hasn’t complained of shortness of breath. He is still taking the anti-viral drug Remdesivir after completing his second round of the drug on Saturday night, the team said. On Saturday, his oxygen levels dropped to around “93 percent,” Conley said, adding that it increased again and is now at 98 percent as of Sunday at noon.

Trump is now “up and around” and moving around his hospital room, Conley said.

In a separate update, national security adviser Robert O’Brien told CBS News on Sunday Trump is in “great shape” and is “firmly in command of the government and the country,” adding that he will brief the president on national security matters later in the day.

“I think he’s going to stay at Walter Reed for at least another period of time,” O’Brien told CBS’s “Face the Nation.”

“Days seven and eight are the critical days,” O’Brien noted. “I think the doctors want to make sure that they’re there for the president and he’s getting the best treatment, but he’s doing well.”

Trump, who was taken to the Walter Reed National Military Medical Center on Friday, released a four-minute video on Saturday in which he said the “real test” of his condition will come over the next few days.

“Over the next period of a few days, I guess that’s the real test, so we’ll be seeing what happens over those next couple of days,” Trump said into the camera.

Trump’s campaign vowed that Vice President Mike Pence, who would assume the presidency if Trump were unable to carry out his duties, would have an “aggressive” campaign schedule this week, as would Trump’s three oldest children.

“We can’t stay in our basement or shut down the economy indefinitely. We have to take it head-on,” Trump campaign senior adviser Jason Miller said on ABC’s “This Week” on Sunday.

White House Chief of Staff Mark Meadows said President Trump on Friday had a fever and rapidly declining levels of blood oxygen before making a recovery.

“Yesterday, we were real concerned,” Meadows told Fox News. “He had a fever, and his blood oxygen level dropped rapidly.”

But the president, he said, has made an improvement. “I’m very, very optimistic based on the current results,” he said, adding, “He’s not out of the woods for the next 48 hours or so.”