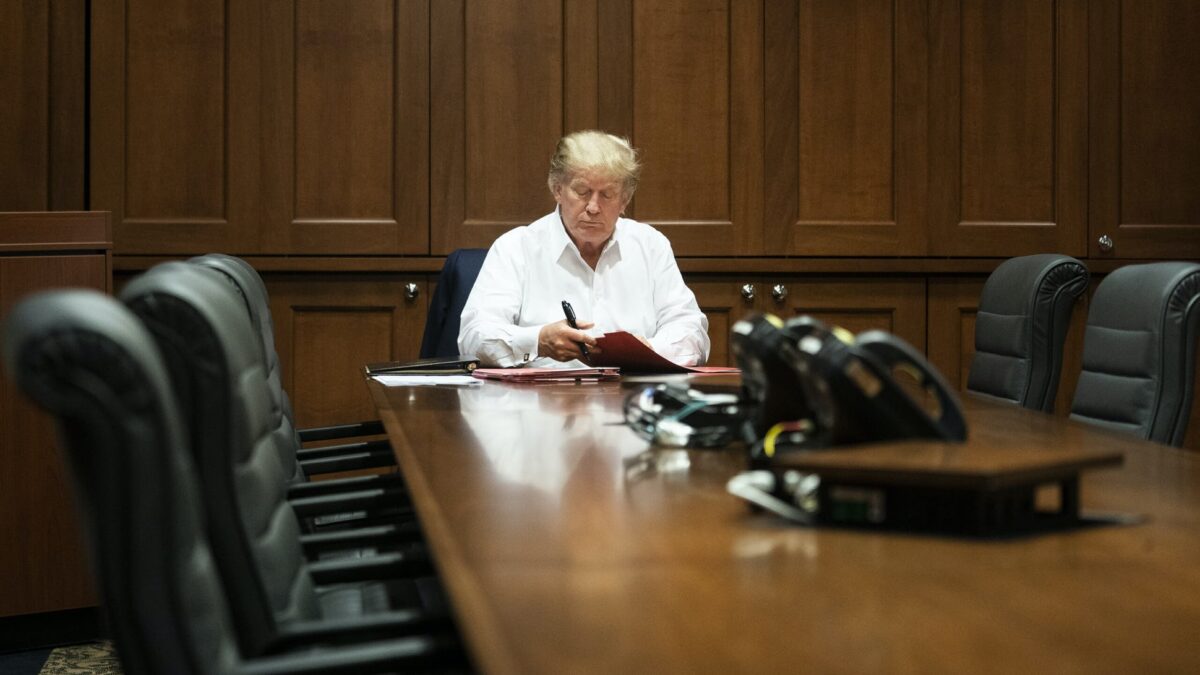 The White House on Saturday night released photos of President Donald Trump continuing to work while being monitored and treated at Walter Reed National Military Medical Center for COVID-19.

White House Senior Communications Advisor Ben Williamson shared another photo of the president. He commented: “The guy’s a machine. @realDonaldTrump getting work in at Walter Reed.”

Trump, who is 74 years old, said in a video address posted earlier Saturday night to Twitter that after not “feeling so well” when he arrived at the military facility on Friday that he feels “much better now.”

He said that the first lady, who is in self-quarantine at the White House, is “doing very well.”

“As you’ve probably read, she’s slightly younger than me—just a little tiny bit. And therefore, we know the disease, we know the situation with age vs. younger people. And Melania’s handling it statistically like it’s supposed to be handled and that makes me very happy and it makes the country very happy,” Trump said. The first lady, who has been experiencing only mild symptoms, is 50 years old.

‘I Very Much Appreciate It’

In his video, Trump thanked “a bipartisan consensus of American people” who have sent him their support as he fights to full recover from the virus. “It’s a beautiful thing to see and I very much appreciate it and I won’t forget it. I promise you that,” he said.

He also thanked world leaders who have sent their well wishes.

Sean Conley, the president’s physician, said that Trump had completed his second dose of a five-day course of remdesivir—an intravenous antiviral drug sold by Gilead Sciences Inc.—on Saturday evening in a nightly update on the president’s condition.

“President Trump continues to do well, having made substantial progress since diagnosis,” Conley said in a statement.

“He remains fever free and off supplemental oxygen with a saturation level between 96 and 98% all day. He spent most of the afternoon conducting business, and has been up and moving about the medical suite without difficulty.

“While not yet out of the woods, the team remains cautiously optimistic. The plan for tomorrow is to continue observation in between doses of Remdesivir, closely monitoring his clinical status while fully supporting his conduct of presidential duties.”

The president is also being treated with the experimental RegEneron monoclonal antibody drug REGN-COV2, well as zinc, Vitamin D, famotidine, melatonin, and aspirin, Conley has said.

Trump said in his address that he has to overcome the virus.

“We’re working hard to get me all the way back—I have to be back because we still have to make America great again,” he said after thanking the doctors and nurses at Walter Reed.

Shortly after on Twitter, he called on Congress to “work together” to pass a COVID-19 stimulus package, which is still being negotiated by House Speaker Nancy Pelosi (D-Calif.) and Treasury Secretary Steven Mnuchin, with Democrats contending the need for further funding over unemployment insurance, state and local funding, child care support, money for testing and tracing, and appropriations.

“Get it done. Thank you,” the president said.

OUR GREAT USA WANTS & NEEDS STIMULUS. WORK TOGETHER AND GET IT DONE. Thank you!

Zachary Stieber and Jack Phillips contributed to this report.